Home Features JUSTIN AND HAILEY Why I’m a belieber in their second wedding in...

Is it weird to be a 41 year old woman heavily invested in Justin Bieber (25) and Haily Baldwin’s (22) relationship? From this vantage point their young love looks so beguiling. I want them to succeed. I’d nearly put money on them lasting at least 10 years (the equivalent to a lifetime by Hollywood standards). That’s even after their second marriage on Monday of this week, just a year after the first. Usually that spells trouble, for sure.

Wasn’t the first wedding enough to seal the deal? What kind of hen party will be it if the bride-to-be is already hitched? In fairness, the initial wedding was in a New York courthouse in September of last year followed by a whirlwind tour of Europe by the insanely loved up bunnies. As Hailey’s uncle Alec Baldwin confirmed at the Emmys a few days later, “They just went off and got married”.

Funnily enough Uncle Al and his wife Hilaria were not among the 154 guests in attendance on Monday at the exclusive Montage Palmetto Bluff in Bluffton, South Carolina.

You might think, well Monday is a weird day for a wedding, they were probably working. No, they were in The Hamptons. These people don’t have regular work schedules. The Moet & Chandon champagne bottles at the wedding had 9,682 swarovski crystals a pop. They weren’t trying to save a few bob by throwing it on a Monday, be under no illusion.

You know you’ve been blessed with the ‘outrageously good looking’ gene when a chunk of your guests are made of the world’s top supermodels like Kendall Jenner and Joan Smalls and you’re still the most divine creature in the room. Hailey and Justin are aesthetically very pleasing.

I remember interviewing Justin around 10 years ago, he must have been only 15 years old, which would have made me 31 (creepy I know). I swear I didn’t fancy him Your Honour. It wasn’t like that. I was just impressed with the young fella. He was very manneredly and warm. I became a Belieber there and then.

Also Despacito is played on repeat in my house, when we need to throw an impromptu party in the kitchen so I can embarrass my boys with some serious mom dancing moves. Bieber, the child star, has grown into a young man who’s clearly been through the worst excesses of world fame, from drugs to poor behaviour. His mental health is fragile. He knows this. He shares his thoughts with his fans frequently through Instagram. It’s very sweet.

He knows Hailey since they were kids attending the same church in Beverly Hills, which seems to be the bedrock to their relationship. Hailey’s dad Stephen told reporters the big bash was more of a religious affair because “bringing God into their marriage will make their union stronger”. It certainly was a heavenly party for a couple who are clearly nuts about each other. Let’s raise a toast, or in my case a piece of toast with some peanut butter on it, to the happy couple! 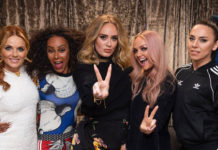 IMPOSTER SYNDROME How to tackle self-doubt…