Wanna flex some celebrity muscle in Hollywood these days to show that age is but a number? Power arms are the way to go; sleeveless, strong and sculpted like 50 year old Renee Zelwegger’s exposed right arm in Armani on the Oscars red carpet. I’m reliably informed her left arm is just as impressive, if not better.

No hint of any bingo wings, no pudgy squidge, no wibble wobble, even when vigorously waving. What the what? Bridget Jones’ 30-something chubby appendages would certainly have dimpled under the pressure. Has the fat been sucked out by a helping surgeon’s hand? Or is it all down to rigorous weight training exercises and protein balls? Former first lady, Michelle Obama asserted her right to bare arms thanks to gruelling 5am gym sessions becoming the patron saint of sleeveless dresses for women of a certain age the world over.

Give me a cardigan and sleep-in any day of the week over taut bi-ceps, or for that matter the White House, but you’ve got to give it to the Becoming author, the results of all that effort were and are tremendous. Work-out culture has become the new normal, fit 50 somethings have arm wrestled the notion of covering up (and fading out) to the floor. Look at J Lo and her super strong arms at the Super Bowl half-time show. At 50, she was making no apology for being outrageously sexy from pole dancing to shaking that famous posterior alongside 43 year old Shakira.

The pair were sensational. Mutton dressed as lamb? Doesn’t that seem like such an old fashioned put-down these days? You rarely hear it anymore thank goodness. Here we had two highly experienced showstoppers doing their thing to dizzying effect, an undiluted celebration of female sexuality and sensuality, beyond  the restrictive notions of fertility. Bravo! My day-time kitchen disco moves have most definitely cranked up a notch or two since the show. The cats may not agree.

Of course the Mother Immaculate of Bare Arms has to be Madonna, who at 61 has been spotted wrapping her biceps and triceps around her 25 year old dancer boyfriend Ahlamalik Williams. Creepy but nice one Madge! I think. The singer’s popping veins and sinewy frame seem to have calmed down this past decade, but that muscle memory is clearly still in tact for perfectly honed arms and meandering hands.

Did you ever wonder how US Vogue editor-in-chief Anna Wintour has managed to retain such sculpted arms at 70? Tennis, every morning before work, 5am sessions. Roger Federer is a close friend, of course he is, they’ve even played together.

So the moral of this story be: You must put in some hard yards if you want to wave bye bye to your bingo wings. Or you could just admire those power arms from a safe distance, get up at a reasonable hour and live happily ever after.

More power to your elbow either way. 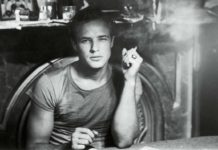 SUNSCREEN, CORALS AND CANCER The truth behind your SPF