Home Features HOLOTROPIC BREATHING High on your own supply

Drug dealers look away now. I’ve just got off my head on, whisper it, air. Like proper buzzing. Best buzz of my life to be honest. I was definitely in an altered state of awareness and it felt so good.

One of the daddies at the school gate roped me into the day long session at his place. He’s a psychologist. Said there was a space at his Holotropic Breathing workshop. He’d do me a deal at €40. It’s usually €80. Little did I know what I was signing myself up for. I’ll never be the same again. Mind officially blown.

So there we all were, six awkward strangers and Arnaud, our tall, dark and interesting guide presenting our lunchtime food offerings in the kitchen before our 9.30am start. I had cycled over and felt utterly winded. Surely I had done enough breathwork for one day.

I was soon to find out there are other ways of inhaling air to make you as high as a helium balloon.

Five of us were newbies. It was primarily curiosity that had brought me to the session, but there was a sense that others had more heavy issues to unravel. I tried to suppress my giddiness.

Arnaud explained Holotropic breathwork was developed in the 1970s by psychiatrists Stanislav and Christina Grof and derived from spiritual practices. Usually he’d have a buddy system but because there was only six of us, we’d go it alone and he would oversee our ‘progress’. As Arnaud blasted the tribal music, we lay on our mattresses, eyemasks in place, snug in our blankets and started inhaling through our mouths as much air as possible before exhaling in a rhythmic beat to the music.

After one song, I thought, this ain’t happen’n for me, I’ll just go along with it anyway. Until. Bam! Suddenly my body was alive, I felt energy whirring throughout.

The first major sensation was my stomach area, what some might even call the Sacral Chakra, heating up. It felt like there was a hot pot weighing on my tummy. It got so hot. It felt so lovely. My face though. It was all tight. My lips could barely move. My body started to feel so heavy. At one point I put my feet together and the buzz joined up in circular motion around my body.

The loud music was throbbing through my system. The heat started to move around my body, to my wrists, to my knees. At one point I felt like I was levitating. Around the room, some were crying out in pain, others moaning in pleasure. It was not distracting to hear them. There was a strong connection between us. No judgement. Hours later, the lighter music seemed to draw us out of our altered state and back to reality. Boo hiss. Reality felt like a comedown.

The afternoon was more of the same. Just when I thought it’s not going to happen again, it kicked in and oh what bliss! Some in the group were not having such a good time of it though. There were hugs and tears following the afternoon session and time to doodle a drawing without overthinking it which we discussed later over tea. For some the day had brought to the surface hard moments while for me it was all energetic, a feeling of being utterly alive and connected. Everyone reacts differently. It was fascinating. I want more. I want to explore more. Next time knowing it’s for real, no doubt. Air? Who knew? 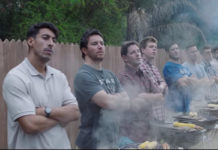 IN PRAISE OF MEN Before things get too gender fluid