Aisling O’Loughlin on the fascinating story behind a vintage label ‘Clodagh of Dublin’ and how one woman’s singular vision brought international acclaim, except at home

‘I believe in zero degrees of separation. If something needs to find you, it will find you – Clodagh, New York Social Diary.

The label read ‘Clodagh of Dublin’.

‘Who’s Clodagh of Dublin’, I ask Marian as I pull out a rather striking long black crepe dress with lace trim from the rail in Jenny Vander’s Vintage Store on Drury Street in Dublin city centre.

‘I’m not quite sure’, says Marian, ‘It just arrived from a big house in Kildare’.

€150 later, I’m on my way with a rather fetching gown and a curiosity to know more about the name on the label. 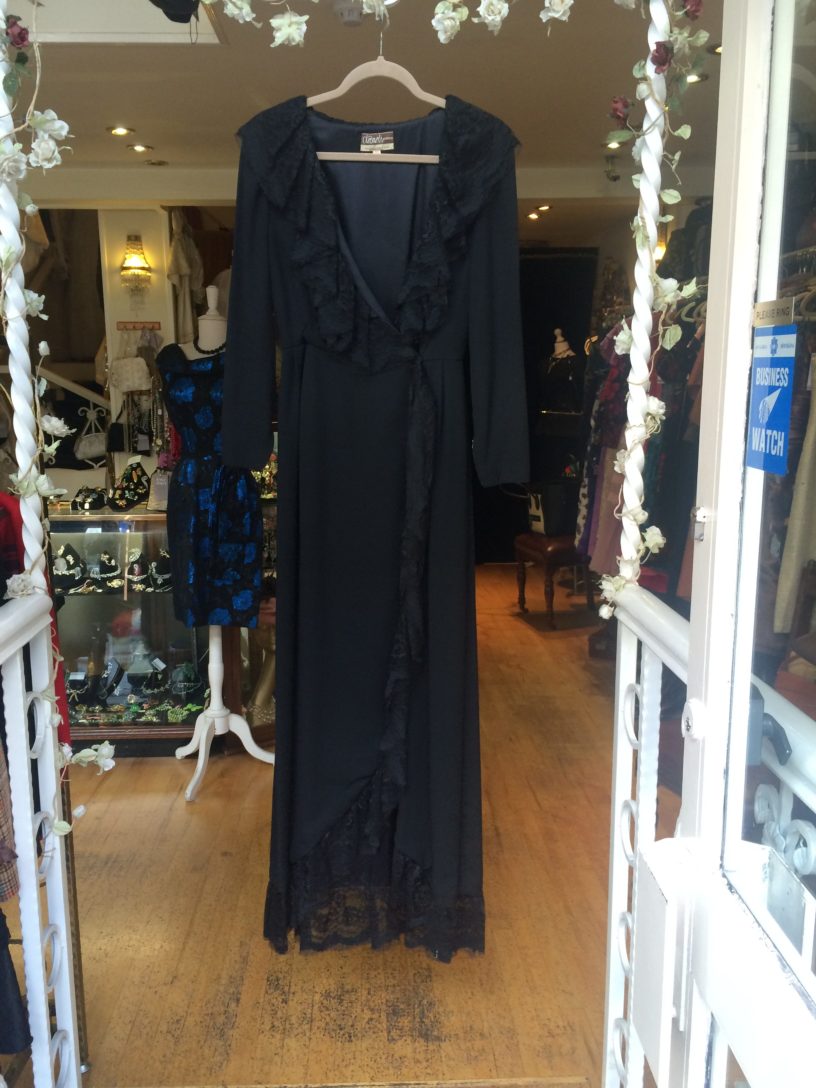 Eventually, my first clue: These photos from the Irish Photo Archive showing a supremely elegant 18 year old Clodagh Phibbs displaying her creations at her first fashion show in the Hibernian Hotel in Dublin in 1956. (The hotel sadly closed it’s door in 1982, despite being around since 1751.)

It turns out Clodagh was the youngest member of the Irish Haute Couture Group alongside Ib Jorgensen, Sybil Connolly, Neilli Mulcahy and Irene Gilbert.  An archive article from The Irish Echo reveals more about his intriguing beauty.  Born and raised in Cong, Co Mayo, it turns out Clodagh grew up in a house where Oscar Wilde once lived.

She went to boarding school in Alexandra College in Dublin, but aged 15, broke her back while horse-riding and spent almost a year in hospital.

While recuperating she came upon an article in The Irish Times about becoming a dress designer and there and then made up her mind to pursue fashion.  She would learn the tricks of the trade at The Grafton Academy.  Clearly not one to do things by halves, six months after leaving hospital and at the ripe old age of 17, Clodagh opened her own fashion house on Dublin’s South Anne Street.  Before long she had moved to a larger premises on Baggot Street and was exporting internationally.

During this time in 60s Dublin she married and took on the name O’Kennedy and became mum to three sons. The article leads me to www.clodagh.com where I get a better understanding of the woman behind the dress and her passion for design.

The next chapter of her life took Clodagh (no more surname from here in) to Spain with her second and current husband, french photographer Daniel Aubry where she discovered her flair for architecture, interior design and furniture design. And here she changes career and moves away from her incredible career as a fashion designer into the world of bricks and mortar.

In 1983, the pair move to New York where she opens Clodagh Design, a studio for architecture, interiors and furniture design.  In her book, Total Design, first published in 2001, Clodagh talks about incorporating nature into her designs.  ‘Everyone has good taste,’ it reads, ‘Don’t be afraid to use yours’.

Her second book, ‘Your Home, Your Sanctuary’ was published in 2008 and tackles the challenges of modern living and how to create space and balance.

Her website states: ‘She was among the earliest adopters of Feng Shui in her design practice. Clodagh is once again ahead of the curve by now incorporating such cutting edge modalities as chromatherapy and biophilia into all of her projects’.

I know.  Me neither! For the record, biophilia is an idea that there’s an instinctive bond between human beings and other living systems and chromatherapy is the use of coloured lights in the bath or shower.  Clodagh’s range of international awards are seriously impressive and make you wonder why she doesn’t have a greater ‘digital presence’ as we’ve all become so used to saying.

Among her accolades are a place in Interior Design Magazine’s Hall of Fame and a spot on New York Magazine’s ‘Top 100 Architects and Decorators’.

She also  designed Robert Redford’s penthouse apartment in Manhattan and created the concept behind Elizabeth Arden’s Red Door Salons and spas throughout the US, as well as the spa at Doonbeg. Recent projects include condominium developments on Manhattan’s Highline and work on the W Fort Lauderdale Hotel.

So why don’t we all know about this super woman?  Or have you all been keeping her a secret from me. I call her office, then in Greenwich Village and after many emails explaining my interest in her work, a phone conversation is set up. She hasn’t lost her Irish accent and comes across wry and worldly.  When I press her on why she’s not well known in Ireland, she’s nonchalant, it would appear self-publicity just ain’t her thing.  She’s too busy travelling the world working on high end projects as her portfolio testifies.  She tells me her son Peter O’Kennedy – who was once a member of The Golden Horde and is now a visual artist – always tells her she should be more celebrated on her home turf.
We whole-heartedly agree.  It seems rather rude that her stellar achievements have gone unacknowledged in Ireland.  From here in, we on Exquisite.ie will endeavour to celebrate this visionary’s talents and bring you more of her singular approach to life.  Also if you can add to this story, please get in touch, we would love to hear more.  Better still, if you have any Clodagh garments in your wardrobe, contact us on hello@exquisite.ie  We could throw an Exquisite Clodagh bash and if we get enough pieces, do a shoot to mark the occasion.

As for our Story Behind series, if you have any interesting yarns to tell behind a piece of clothing, a picture, jewellery, you name it, we want to know more. And if we like the tale enough, we’ll share it with our readers.

Here’s the first piece we’ve discovered from a reader Diane who found this beauty in a charity shop and fell for the heavy material.

We’re looking for more Clodagh of Dublin pieces. Please contact us on hello@exquisite.ie if you come by any items.

RULES SMULES! Why we owe those feisty fashion renegades our wardrobe...